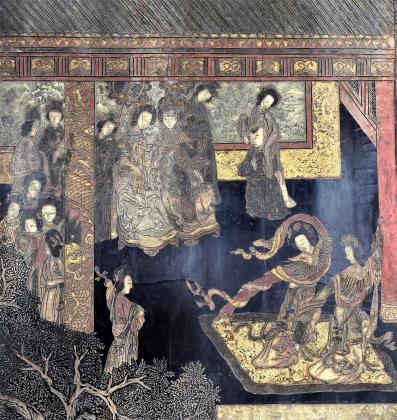 Spring Morning in the Han Palace, a large Chinese lacquer screen dated to 1672 in the Freer Gallery of Art, exemplifies the shifting, transcultural identity of some works of art. Rendered in the kuancai technique, in which a design is cut into a lacquer surface and filled with pigments and gold, this type of screen is internationally known as “Coromandel lacquer”—named for an Indian transshipping port via which Chinese screens arrived in Europe. Not only does the name obscure their Chinese identity, they are usually studied from a European perspective. This talk refocuses the lens on the origin, status, and meaning of “Coromandel” screens in China.

Over 160 women and children enjoying themselves in sequestered palace grounds are presented as a complex interweaving of customs and furnishings from the Han, Tang, and Ming dynasties in Spring Morning in the Han Palace. The scene conveys wishes for family continuity and longevity. An encomium on the reverse reveals the screen was a lavish gift made for a Qing dynasty official and descendent of Confucius. Such screens were coveted luxury furnishings in China, as well as in Europe, albeit appreciated differently in each place.