Thanks to an unprecedented gift from the Mary Livingston Griggs and Mary Griggs Burke Foundation, the Mary Griggs Burke Center for Japanese Art is established at the Department of Art History and Archaeology at Columbia University. The Burke Center is envisioned to support the study of Japanese art at Columbia and to advance the understanding of the art and culture of Japan and its relevance to other fields of inquiry, especially other fields of East Asian Art, Japanese history, religion, and literature. Mrs. Burke, who was renowned for her collection of Japanese art, was a steadfast supporter of the Department’s programs in Japanese and East Asian art for many years and it is in the spirit of her generous commitment that the Center shapes its activities. The Burke Center will foster the study of Japanese art in various ways. It will support individual scholars through postdoctoral fellowships and invited professorships; it will hold conferences, symposia, and related programs, and support publications.

Renowned for her collection of Japanese art, the largest and most important private collection outside Japan, the late Mary Griggs Burke had early encounters with Japan thanks to the passion her mother, Mary Livingston Griggs, had for Japanese culture, and to the architect Walter Gropius’s recommendation that she travel to Japan to study Japanese architecture and gardens when she was building a house in Oyster Bay, Long Island in 1954. Inspired to study Japanese culture, Mary Burke enrolled in courses at Columbia University (where she had received an M.A. in psychology several years earlier) with Professor Donald Keene, and in the history of Japanese art with Professor Miyeko Murase. Her study of Japanese art inspired her to deepen her commitment to collecting, with annual trips to Japan with her husband Jackson Burke and Professor Murase. In 1975 her collection was first shown to the public at the Metropolitan Museum of Art, and many exhibitions would follow, including one in 1985 at the Tokyo National Museum, the first time a private collection of Japanese art from overseas was exhibited there. Less widely known is that Mary Burke was a steadfast supporter of students of East Asian art at Columbia University. For decades she provided scholarships, underwrote seminar travel to view Japanese art in the U.S. and abroad, and most importantly, made her collection available for study at her homes in Manhattan and Oyster Bay. Throughout her years of involvement with Columbia’s program in East Asian Art, Mrs. Burke understood that to support and encourage the direct study of works of art at the graduate level both contributed to the understanding of her collection as well as to the growth of the field as a whole. Her legacy continues with the Mary Griggs Burke Center for Japanese Art. 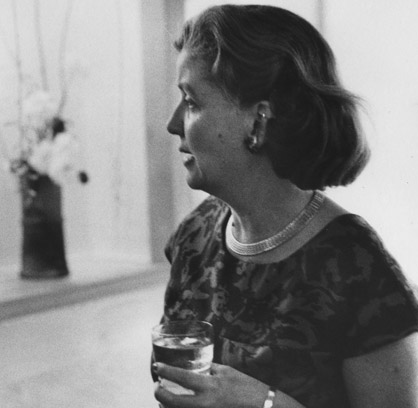 Mrs. Burke understood that to support and encourage the direct study of works of art at the graduate level both contributed to the understanding of her collection as well as to the growth of the field as a whole.